Programming or coding as some call it, is the backbone of the software industry. It comprises of writing Programs – lines of instructions. These instructions are fed to the computer for processing and output. Sounds simple, doesn’t it? Well, trust me, its no Rocket science. But, I have seen students think of it as such and ultimately scraping the entire idea of learning how to program.

Many courses being taught at the higher levels of education, today, don’t start off at the absolute beginning of Programming. For a person who has no prior experience in programming, knowing the basics is very essential. In these series of tutorials, I will take you on the journey that I did, back at school and learned whatever little of Programming, that I know today. We will begin by using LOGO, the programming language. I believe it will impart good insights into the bare-bones of Programming.

We need to know a few terms before we begin using LOGO. Don’t worry these are no jargons, only the bare minimals.

An instruction is a command to the computer which causes a certain action to be performed.

Lines of instruction that are executed or processed by the computer one by one.

We will need the MSWLogo software to go any further. You can get it from here. Once installed, start Microsoft Windows Logo from the start menu. The application is composed of a pair of Windows. The upper one with a white background and a Triangle in the middle is your drawing area.

The lower one titled Commander is where you will write the instructions and feed it to the computer.

LOGO is a programming language that works on turtle graphics. A triangle shaped object (the Turtle) is used to draw lines & curves on the screen. To draw these lines you instruct the turtle to move forward or backward and while doing so, it leaves a line behind. Try typing the instruction given below in the textbox to the right of the Execute button in the Commander window and then press enter or click on Execute. 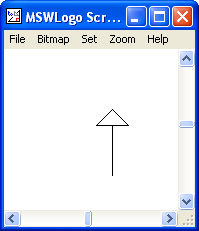 As you can see, the turtle moved upward, or forward in its own orientation, leaving behind the black line. The instruction we provided is composed of two parts: FORWARD – the command to make the turtle go forward and 50 the distance it moved forward by. Now type in the following command and press enter. 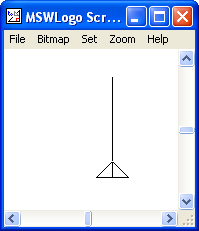 The turtle comes back 100 units drawing over the old line and extending it by 50 at the bottom. Unlike in real life, an overwrite on the same line doesn’t make the line thicker. Let us try some more tricks, type in the following instruction and press enter.

This makes the turtle turn right (clockwise) by 90 degrees allowing us to draw a horizontal line. The RIGHT command is followed by an angle in degrees. The turtle can turn in any direction with this. But, we have a command to make it turn the other way too – the LEFT command. Now execute the following command. 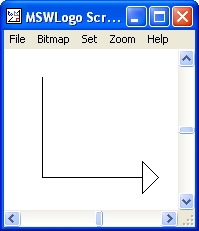 FD command is an alias (another name) for the FORWARD command and it provides the exact same functionality. The Aliases for the commands are given in the table below.

Lets complete our diagram by executing these instructions one by one. 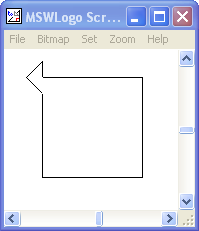 There we have it; Mr. Paniter has drawn us our very own Square. The third instruction, RT 270 can be replaced by an equivalent LT 90. You can provide a negative value to the FD and BK commands to make them go the opposite way. You can even give negative angles or angles greater than 360 degrees and make the poor turtle go round and round (apparently, the slow dude turns so fast, we won’t be able to see it spin its head off, or maybe it has some sharp geomerty skills and does only one round).

Did I mention how the turtle goes about drawing all those lines? The guy uses a pen! Not your average pen that runs out of ink every second day, though. Just as we raise our pen in between writing two words, you can make the turtle raise its pen and move to some place else. During this movement, it won’t draw a line. We use the PENUP command to raise the pen up. While in this state, moving in no direction will result in a line being drawn. To lower the pen use the PENDOWN command. When the pen has been lowered, lines will again begin to be drawn following an FD OR BK command (unless offcourse if you move it by 0 units).

Note: PENUP & PENDOWN commands are not followed by any numbers. You can also use their aliases PU & PD.

Clear the screen using the CS command and execute the following instruction to draw a dashed line. 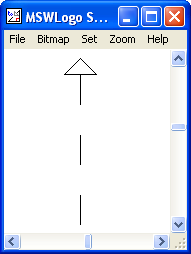 Chaining Instuctions in one line

You can write multiple instuctions in one line. For example, the dashed line can be drawn using the following command.

The REPEAT command is used to repeat a series of instructions a given number of times. For example, you can use the following code to draw a square.

The dashed line can be drawn with the REPEAT command.

Syntax is the grammar of instructions. Every command has a syntax. For example, the FD command is followed by a number, whereas the syntax of PU & PD commands don’t contain any numbers following them. We can express these syntax in general forms:-

Syntax helps us understand the structure of the command, how its written/used. Every Programming language has its own set of commands, statements & their corresponding syntaxes.

Note: Description of statements is not relevant to the LOGO language. We will go through it in a later tutorial.