Computer science is a field of study that deals with solving a variety of problems by using computers. The problem to be solved could be as simple as performing the addition of two numbers, or as complex as designing a robot capable of making decisions in a real-time environment. To solve a given problem by using computer, you need to design an algorithm for it. The nature of an algorithm often depends closely on the nature of the data on which the algorithm works. Therefore, the study of algorithms also involves the study of the data structures that algorithms work on.

This tutorial discusses the role of algorithms and data structures in problem solving through computers. It also discusses some standard techniques that can be used to design algorithms. In addition, it discusses the effect of the selected algorithm on the efficiency of the solution.

Role of Algorithms and Data Structures in Problem Solving

Problem solving is an essential part of every scientific discipline. In today’s world, computers are widely used to solve problems pertaining to various domains, such as banking, commerce, medicine, manufacturing, and transport.

To solve a given problem by using a computer, you need to write a program for it. A program consists of two components, algorithm and data structure.

To solve the problem in an efficient manner,you need to select a combination of algorithms and data structures that provide maximum efficiency.

The word algorithm is derived from the name of the persian mathematician Al Khwarizmi.

The preceding step-by-step procedure is an algorithm because it produces the correct result in a finite number of steps.

An algorithm has five important properties:-

A problem can be solved by using a computer only if an algorithm can be written for it. In addition, the use of algorithm provides many other benefits:-

Multiple algorithms can be designed to solve a particular problem. However, the algorithm may differ in how efficiently they can solve the problem. In such a situation, an algorithm that provides the maximum efficiency should be used for solving the problem. Efficiency here means that the algorithm should work in minimal time and use minimal memory.

One of the basic techniques for improving the efficiency of algorithms is to structure the data that they operate on in such a way that the resulting operations can be efficiently performed.

The way in which the various data elements are organized in memory with respect to each other is called a data structure.

Data can be organized in many different ways; therefore, you can create as many data structures as you want. However, there are some standard data structures that have proved useful over the years. These include arrays, linked lists, stacks, queues, trees and graphs. We will learn more about these data structures in the subsequent tutorials.

In addition to improving the efficiency of an algorithm, the use of appropriate data structures also allows you to overcome some other programming challenges, such as:-

On the other hand, when an array of size 50 is used, the algorithm can be written as:-

Data structures also enable the creation of reusable code components. Suppose you have created a class to implement a data structure that stores and retrieves requests in the order of their arrival. Once the class is created, the same class can be used in several different applications that need to service the requests of multiple users on a FCFS basis.

Data structures can be classified under the following two categories:

Designing Algorithms and measuring their efficiency

The divide an conquer approach is an algorithm design technique that involves breaking down the problem recursively into sub problems until the sub problems become so small that they can directly be solved. The solutions to the sub problems are then combined to give a solution to the original problem.

Divide and conquer is a powerful approach for solving conceptually difficult problems. It simply requires you to find a way of:-

Consider an example where you have to find the minimum value in a list of numbers. The lists is as shown in the figure:-

To find the minimum value, you can divide the list into two halves, as shown in the following figure:-

Again, divide each of the two lists into two halves as shown in the following figure:-

Recursion refers to the technique of defining a process in terms of itself. It is used to solve complex programming problems that are repetitive in nature.

Consider a function f(n), which is the sum of the first n natural numbers. This function can be defined in several different ways.

In mathematics, the function will be defined as:-

However, the same function can be defined in a recursive manner as:-

In this case, the recursive definition of the function f(n) calls the same function, but with its arguments reduced by one. The recursion will end n = 1, in which case f(1) = 1 has been defined.

This same factorial function can be redefined as:-

This definition of n! is recursive because it refers to itself when it uses (n – 1)!.
The value of n! is explicitly given where n = 0; and the value of n! for arbitrary n is defined in terms of the smaller value of n, which is closer to the base value 0.

If you have to calculate 3! By using recursion. you first define 3! in terms of 2!:-

This recursive algorithm for determining the factorial of a number n can be written as:-

Please note that every recursive algorithm should have a terminating condition. Otherwise, the algorithm will keep on calling itself infinitely.

The main advantage of recursion is that it is useful in writing clear, short, and simple programs. One of the most common and interesting problems that can be solved using recursion is the Tower of Hanoi problem.

Tower of Hanoi is a classical problem, which consists on n different sized disks and three pins over which these disks can be mounted. All the disks are placed on the first pin with the largest disk at the bottom and the remaining disks in decreasing order of their size as shown in the following figure:- 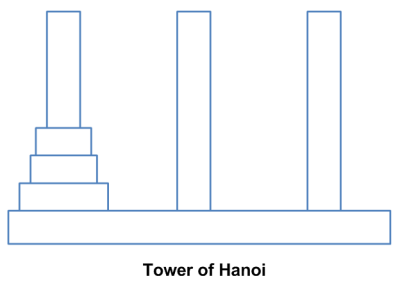 The objective of the game is to move all disks from the first pin to the third pin in the least number of moves by using the second pin as an intermediary.

To play this game, you need to follow rules:-

Let n be the number of the discs. If n = 3, it will require seven moves to transfer all discs from pin one to pin three, as shown in the table below.

The moves given in the preceding table ar illustrated in the following figures:-

The following algorithm can be used to move the top n discs from the first pin START to final pin FINISH through the temporary pin TEMP:-

In general, this solution requires 2n-1 moves for n discs.

Determining the Efficiency of an Algorithm

There can be cases, where a number of methods and algorithms can be used to solve a problem. In such a situation, it can be difficult to decide which algorithm to use.

When there are several different ways to organize data and devise algorithms, it becomes important to develop criteria to recommend a choice. Therefore, you need to study the behavior of algorithms under various conditions and compare their efficiency.

The lesser resources that an algorithm uses, the more efficient it is.

An example of a situation where a time/space tradeoff can be applied is that of data storage. If data is stored in a compressed form, the memory usage is less because data compression reduces the amount of space required. However, it is more time consuming because some additional time is required to run the compression algorithm. Similarly, if data is stored in its uncompressed form, the memory usage is more, but the running time is less.

To understand how the nature of an algorithm affects the execution, consider a simple example. Suppose assignment, comparison, write, and increment statements take a, b, c, and d time units to execute respectively. Now, consider the following code used to display the elements stored in an array:-

The execution time required for the preceding algorithm is given by:-

Here, T is the total running time of the algorithm expressed as a linear function of the number of elements (n) in the array. From the preceding expression, it is clear that T is directly proportional to n.

In the preceding code segment, a total of n comparisons are being made. Therefore, the total running time of the algorithm, T is directly proportional to n. 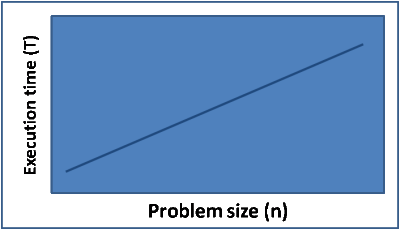 If you count the number of comparisons in the preceding code segment, they come out to be (n 2 + n), which is a quadratic function of n. Therefore, the total running time is directly proportional to n2. 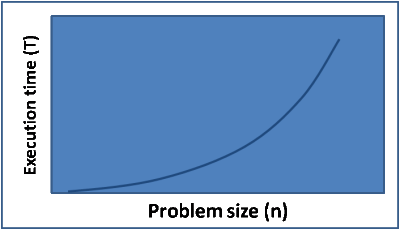 The following table lists some possible orders of growth, and their corresponding big O notations.

Now that you know how the efficiency of a particular algorithm is determined, let us see how this knowledge can be used to select an efficient algorithm.

According to their orders of growth, the big O notations can be arranged in an increasing order as:-

The following table depicts the orders of growth for the preceding big O notations.

The execution time requires for Algorithm A is given by:-

As T is a linear function of n.

Therefore, the algorithm is of the order O(n).

Now determine the time required to execute algorithm B:-

Unlike Algorithm A, the time taken by Algorithm B is a constant, and does not depend on the value of n. Therefore, the algorithm is of the order O(1).

This means that when the problem is very large in size, Algorithm B would prove to be much more efficient than Algorithm A.

Suppose you have a list of names in which you have to search for a particular name. You have designed an algorithm that searches the name in the list of n elements, by comparing the name to be searched with each element in the list sequentially.

The best case in this scenario would be if the first element in the list matches the name to be searched. The efficiency in that case would be expressed as O(1) because only one comparison was made.

Similarly, the worst case in this scenario would be if the complete list is traversed and the element is found at the end of the list or is not found in the list. The efficiency in that case would be expressed as O(n) because n comparisons were made.

Continuing with the same example, the average case efficiency can be obtained by finding the average number of comparisons. Here,

(n + 1)2 is a linear function of n. Therefore, the average case efficiency will be expressed as O(n).

A search algorithm with a better worst case efficiency is binary search that provides an efficiency of O(log n) in the worst case. We will learn more about this algorithm in the subsequent tutorials.