One of the important aspects of the Object Oriented Methodology is relationship. Objects do not exist as isolated entities, rather, they exhibit some kind of relationship with other objects. Some of the common relationships between the classes are listed below:-

This is the relationship that exists between a class and its instance or object. Real world examples of such a relationship can be:-

Classes can be nested i.e a Class can contain another class. The relationship between two such classes is called composition relationship. 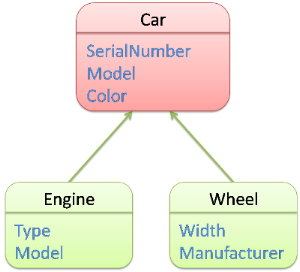 The following code represents the Composition relationship that is depicted in the above diagram.

The concept of OOP allows a class to make use of another class i.e delegate some portion of its work to another specialized class. The relationship between these two classes is termed as utilization. Ferari an object of the car class, is driven by Michael, an object of the driver class. These two entities have a utilization relationship between them.

The following code snippet demonstrates the utilization relationship between the Sorter and the Swapper class.

This example uses the bubble sort algorithm to sort an array of integers in the ascending order. While sorting, two elements of the list need to be swapped when they are not arranged ascendingly. The Sorter class employs the Swapper class for this job thus utilizing it.

Just as a child inherits qualities from his/her parents, a class can inherit data members and functions from another class. Consider the following class diagram:- 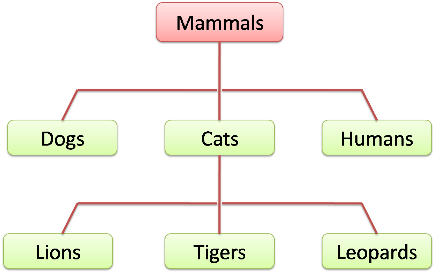 The Mammals class is the base class as it inherits its attributes to other classes. Dogs, cats & Humans are its child classes. This hierarchy is derived from the common set of attributes that the classes share. Mammals, for example are warm blooded, vertebrates, possess external ears and have hair on their body. These characteristics also pertain to Dogs, Cats, Humans, Lions, Tigers and Leopards, thus making them mammals. In C#, a class can have multiple child classes but only 1 base class. Multiple inheritance which existed in languages such as C++ has been scrapped because they tend to cause more problems than they solve.

Some key terms related to Inheritance are listed below.

Note: Private members are not accessible from the sub class. So, the follwoing code would cause a ‘ConsoleApplication1.Vehicles.Name’ is inaccessible due to its protection level. error.

This process is very simple as the only thing one needs to remember is that the sub class should be a type of the base class. For example: Human is a type of Mammal, Car is a type of vehicle and so on.

Note: Improper usage of Inheritance will not result in any syntactical error. But, the design model for the program would be at fault.